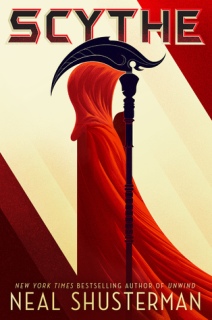 A world with no hunger, no disease, no war, no misery. Humanity has conquered all those things, and has even conquered death. Now scythes are the only ones who can end life—and they are commanded to do so, in order to keep the size of the population under control.

Citra and Rowan are chosen to apprentice to a scythe—a role that neither wants. These teens must master the “art” of taking life, knowing that the consequence of failure could mean losing their own.

I buddy read this book with Sara and I’m so grateful that she read this with me! It is one of my favorites so far this year and it was a blast discussing it with her 🙂 Check out her review here!

Scythe takes place in a futuristic version of our world in which all major problems have been conquered – disease, war, unhappiness. Even death has been conquered, and so the only way to control the population is for appointed Scythes to “glean” people. Citra and Rowan were chosen as apprentices to the Honorable Scythe Faraday. Not only must they learn what it means to be a Scythe, but they must do so while fighting for their lives in a world that is once again becoming corrupt.

I’m surprised by how much I loved this book. I’ve heard great things about it and I thought it sounded interesting so I expected to enjoy it, but it absolutely blew me away. I thought the concept was so unique. It has been so long since I read a dystopian novel, but the premise of this one is unlike any other I’ve read before. I found the idea of a world where even death has been conquered to be extremely interesting. It was fascinating to see how the author imagined this would change each aspect of life. The differences he included – and the world-building overall – were amazing.

One of the many things that stood out to me about this book was the characters. They were incredibly well-written and complex. Although there were two main characters – Citra and Rowan – there were so many more that the author took the time to develop. Some were lovable, some were absolute bastards (I’m looking at you Goddard!!), and some were in between, but I had strong feelings about all of them. I really found myself rooting for the good guys to come out on top and for the good of the Scythedom to be restored.

Shusterman’s writing was also exceptional; I loved his clever style. Despite this being a serious novel, I found myself laughing out loud at times because of the little jokes and sarcastic comments he included which were a fun addition. The format was also unique because at the end of each chapter, an entry from one of the Scythe’s journals was included. I thought this added unique perspective to the story.

The plot was so captivating. I never knew where the story was headed or what happened next. As you can probably imagine, this was extremely suspenseful and I was on the edge of my seat the whole time. There were several twists and I was only able to predict one (and even then, I figured it out right before it was revealed). I thought the conclusion was perfect – it answered a lot of my questions and wrapped things up nicely, but also set up the second book. I am so incredibly excited to read Thunderhead now.

I only have one criticism, although it clearly didn’t affect my enjoyment of the book too much. I just didn’t find myself completely invested in the romance between Citra and Rowan. I liked their relationship as it was very complex, but I just felt that a bit more time could have been devoted to establishing the romantic connection between them. I love shipping characters, but in this case I was more worried about each character individually than the idea of them ending up together.

Overall, I fell in love with this novel. It was unique, well-written, and captivating. I found myself so invested in the story and I was constantly wondering what was going to happen next. I’m so excited to start reading the sequel. I would highly recommend this one!!

Have you read Scythe? If not, are you interested in reading it? What’s your favorite dystopian novel?